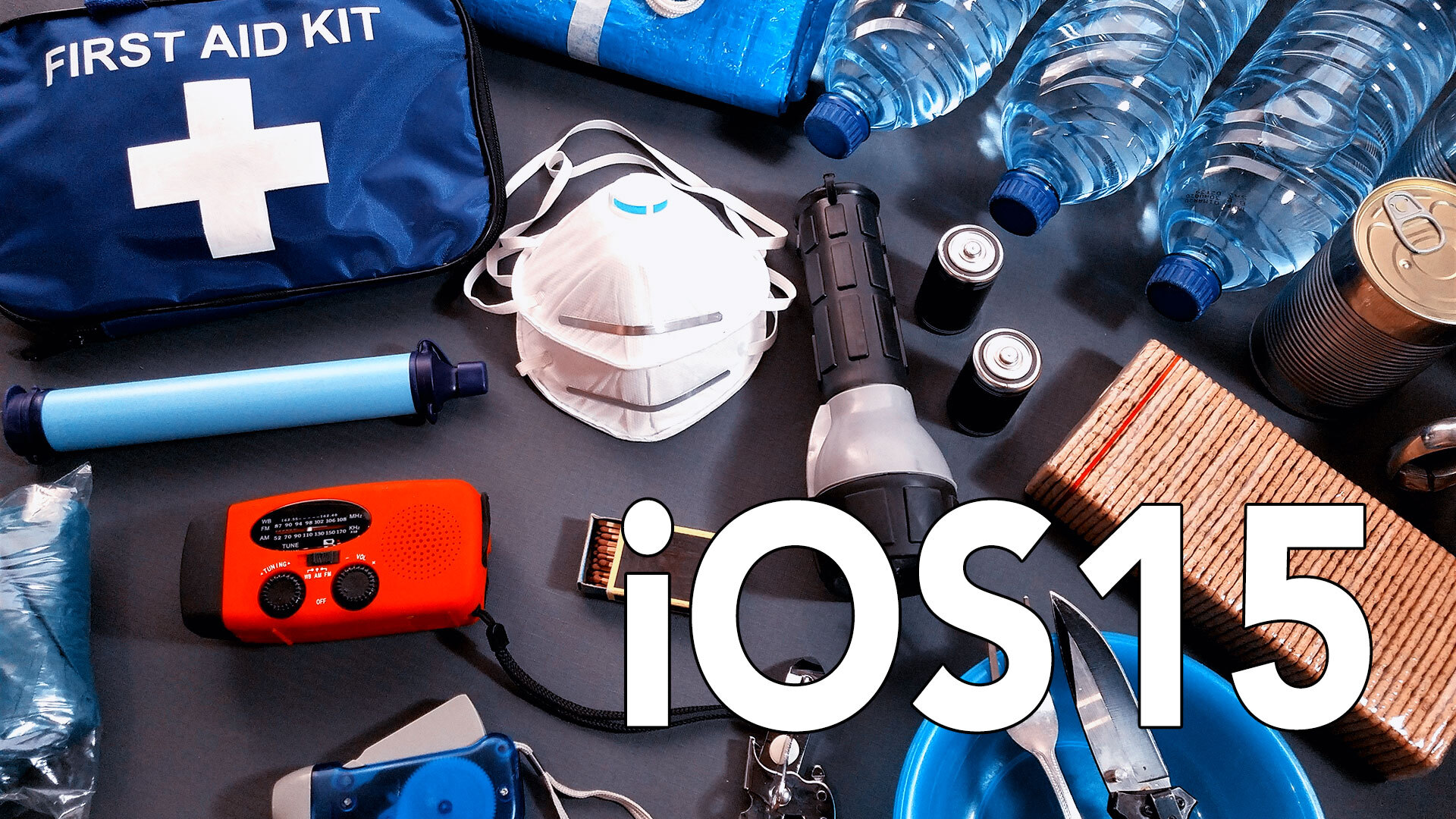 Apple unveiled iOS 15 during its WWDC keynote presentation in June. It’s a big update for iOS users and are many new features. We’ve compiled a list that will make the most impact on iPhone users.

You can set Do Not Disturb mode so that others can see it in Messages. This will let them know you might not respond immediately. They have an option to get through if they need it urgently.

The most interesting feature is the new Focus mode or modes. You can create a work focus mode to limit notifications from apps and people. In each focus mode, you can choose which apps you wish to display on your home screen. You can also create your own focus modes.

FaceTime has seen a significant update in iOS 15 and introduces many new features. Spatial audio will allow you to separate voices, making group chats more natural. The new grid view displays everyone in the same size as before and highlights the person speaking. The new microphone modes make it easier to hear others. Isolation Mode removes background noises to help focus on your voice and Wide Spectrum takes in all sounds around you. FaceTime will also offer Portrait Mode, which automatically blurs the background. Facetime will also let you know if you are talking while muted.
FaceTime Links is probably the most exciting new feature. You can create a link for a future FaceTime call and then send it to any app or attach it as a calendar event. These links can be clicked on by users on Android or Windows to join your FaceTime call online.

The new “Live Text” feature uses machine learning to locate text in images and can be treated as regular text. This all takes place on your device to protect your privacy. You can point the Camera app at text and an indicator will appear in the lower right. Tap to select and then it can be copied to an email or message. This works across the entire operating system and not just in Camera app. You can search for text in photos and select text from images online. Live Text recognizes them exactly like native text: select a number to call it in one click or select an address to open it on a map.
Live Text is not limited to text. It can recognize pets, other animals, natural objects, landmarks, books and common objects as well.

Apple is making iOS 15 all-about sharing. Apple has a lot of sharing features that it gathers under the umbrella name SharePlay.

FaceTime calls allow you to listen to music and watch video together. Audio and video will sync, and other participants on the call will have media controls to pause, skip, or create a playlist. Screen sharing even works across Apple devices. You’ll be able to share video and music in FaceTime, all in sync. This will work with Apple Music, the TV app, and other apps. Apple also has an API so that other apps can update to support it.

Apple’s new “Shared with You” section will highlight and collect the items that people have sent you via iMessage. You can view all the photos that people have sent to you in Messages by opening Photos. This is also true for News, Podcasts and TV. This is a great way for people to quickly find the links they send without having to scroll back through their message threads. You can pin things in Messages and they will be highlighted in the Shared with You section of each app.

As we mentioned above, content sent in Messages by someone to you (photos and links, music, news, podcasts, etc.) will be added to a “Shared With You” section of the corresponding app. You don’t need to look through a message thread in order to find the link you are looking for. You can simply go to Safari’s Shared With You section. You can pin the link if you are certain it is important. It will be highlighted and moved to top in the Shared with You section. You can see who sent it and tap their name for a reply.
Sharing multiple photos in Messages produces a collage or a stack. Tap on one of the images to see a grid view. You can also view individual images and send a Tapback response.

The Wallet app already provider a lot of features: you can handle tickets, payment cards, and transit cards. It can’t replace your actual wallet, however, Apple is working on a major update to Wallet to change that. CarKey was first released in iOS 13.6, but it doesn’t have much support. It now supports Ultra Wideband (UWB), and some automakers will support it by the end of 2021. Wallet will allow you to use other types of keys such as your home key (with a supported smart lock), your work keys to enter your workplace, and hotel keys. Hyatt will support keys in the Wallet App at more than 1,000 properties later this year.
In supported states, you’ll be able to store your government-issued ID in Wallet. In the supported states, you can scan your driver’s licence or state ID to allow Wallet to store a valid ID that can replace your physical one. It’s encrypted and stored within the Secure Element so that no one ever sees it (not even Apple).

iOS 15 now has a new feature called Focus, which allows you to set specific “modes” in the control center to reduce distractions. You can choose from a list of suggested Focus modes that are suitable for personal, work, leisure, gaming, reading, driving, and fitness. Or you can create your own. You can choose which apps or people you want to get notifications from, and which ones you want to block. This will allow you to keep important interruptions out of your Focus. You can also create a status message or an auto-reply to Messages. This lets people know that you might not respond immediately. Third-party developers will have access to your status via an API. This allows them to show that you are away.

You can set your Focus mode on one Apple device and it will activate on all other Apple devices.

Maps didn’t get many new features, however there are improvements in details. The 3D view in Apple Maps has a new look and includes more detail for landmarks, vegetation and special roads. There will be more details such as crosswalks and turn lanes. You can also see bus and bike lanes and 3D interchanges. A new 3D augmented reality walking direction view is at one end, and a large 3D globe view is at the other. Maps has more road details in major cities, and several features for those who take transit.
You can pin the buses and trains that you use to get around on transit routes. This will keep you up-to-date with their status. Maps will let you know when you have reached your destination while riding transit. Search now allows you to filter your results and find what you are looking for more efficiently.

Apple’s browser underwent a major redesign and got new features. The tab bar now appears at the bottom of your screen and disappears when you scroll down. To switch between tabs, swipe left or right on the tab bar. To refresh the page, pull down on the top. You can now see the tab grid in a new overview. Search by voice is also possible. Tab Groups are able to be created from tabs. They’re automatically synced between all of your Apple devices.

Perhaps the best feature of Safari on iOS is its support for browser extensions.

While the Photos app has a few new features to offer, it appears that most of the effort has been focused on the Memories experience. You can now choose from hundreds of new songs if you are a subscriber of Apple Music. The Memories tool will show you songs from Apple Music that are popular at that time or where you were traveling. Memories can have a new look thanks to new animations and transitions. You can quickly pause a Memory to change its appearance with different styles, music and photos.

Other than the major Memories overhaul, there are many other small improvements. The initial image sync is faster when you set up a new device. It’s faster to identify people and easier to correct mis-identifications. The info pane has been enhanced with more details and smart object identification.

Although there are only a few minor changes to the Health app, they are significant. You can share your health trends and data with others, as well as get alerts. You can view Lab Results in your Health app from a health care provider that supports it. If your doctor’s system supports it, you can also share data from your Health App with your doctor.

The new Walking Steadiness measurement uses your iPhone’s sensors and measures the pace, cadence, stride and other metrics to determine how likely you are for a fall.

After years of requiring an Internet connection to function, Siri now works offline on the device. Your data isn’t sent to Apple for analysis anymore which is good news for privacy. Siri can complete any action that doesn’t require data over the internet. For example, you can set alarms and timers, read recent Messages, turn on Dark Mode, and many other things without an internet connection.

In addition Siri is now more secure and private, and it runs a lot faster.

New animated backgrounds for the Weather app include thousands of different variations that better reflect the time, weather, clouds, and precipitation. The layout of the app has been updated to provide more information. It now includes new modules for maps and a 10-day forecast.

The great success of iOS 14’s home screen redesign is Widgets. Apple has added a number of widgets to its popular apps with iOS 15. Widget Smart Stacks allows you to dynamically add new widgets to apps that you use frequently.

iCloud isn’t going to change in iOS 15, but you can upgrade to iCloud+ that introduces new privacy features. These include iCloud Private relay (which hides you location, IP address and browsing activity), email aliases and HomeKit Secure Video support. Users that pay for iCloud storage will get these features free of charge. Apple also offers a free service for those who don’t pay: If your storage is not sufficient to backup your iPhone before upgrading to iOS 15, Apple will lend you the space for three weeks.

An iOS update would be incomplete without new Memoji options. iOS 15 will give you access to more than 40 new outfits and new options for glasses. You can also adjust your eye color individually and change the headwear colors. With cochlear implants and oxygen tubes, you can express yourself. Nine new Memoji stickers allow you to express yourself in even more places.