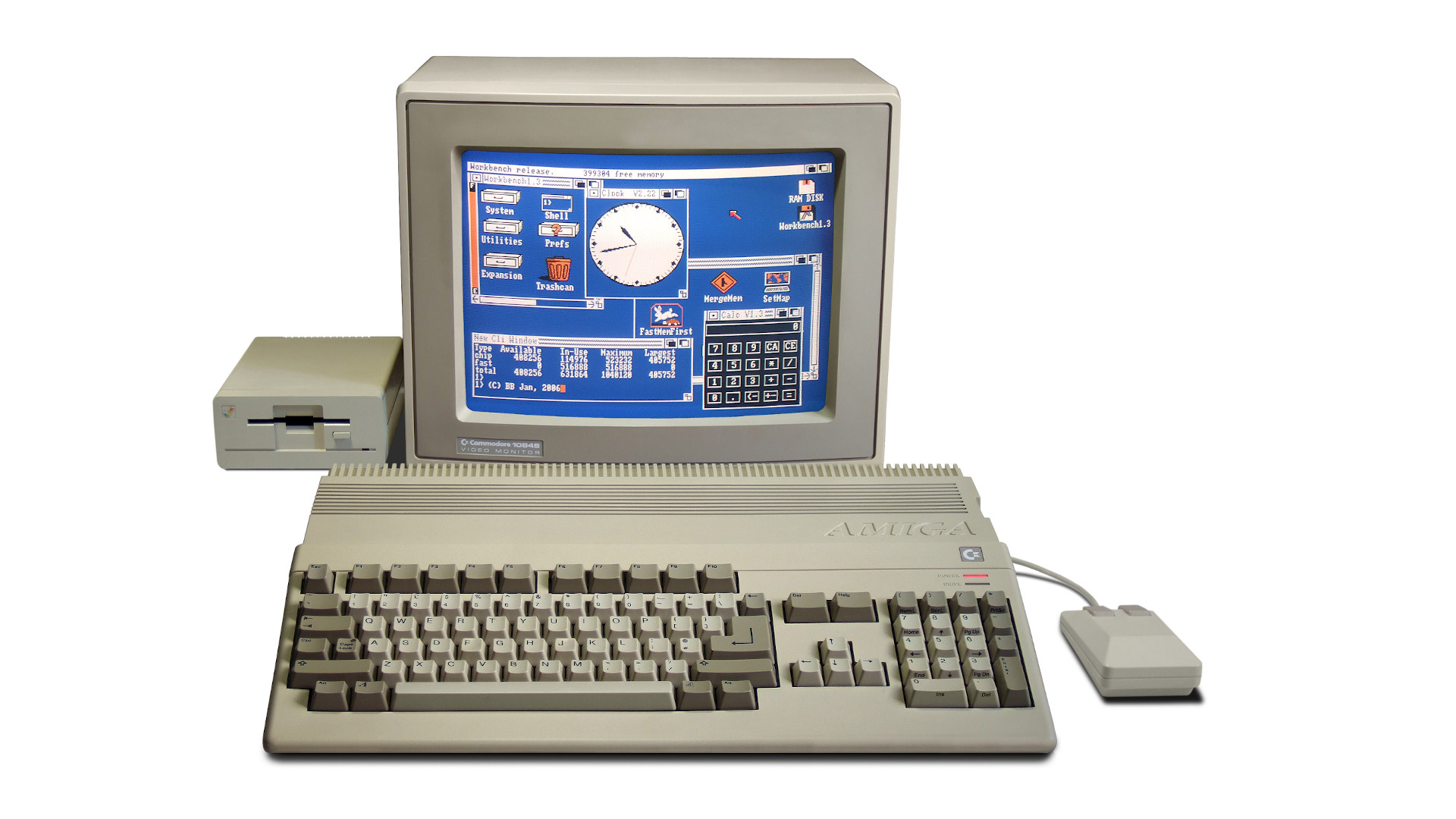 Commodore presented the Amiga 1000 on July 23, 1985 with hardware that was impressive for the time: a Motoroala 68000 main processor with a clock frequency of 7.16 MHz. It was a 16-bit CPU that internally used 32-bit. The Amiga had 512 Kbytes of main memory. The computer was developed by a team of engineers at Commodore International, led by Jay Miner. Their design featured a number of custom chips (e.g., Paula, Denise, Agnus), which took over special tasks in terms of graphics and sound and thus relieved the CPU, it was far ahead of the competition when it came to multimedia.

This made it a popular choice for home users and video game developers. The Amiga was also used by a number of professional video editing and special effects studios. The Amiga's popularity began to decline in the early 1990s, as new technologies and platforms emerged. However, a small community of Amiga enthusiasts has kept the platform alive, and a number of new products have been released in recent years.

The system achieved it's breakthrough in May 1987 when the inexpensive Amiga 500 was introduced. The Amiga 500 became the defacto Amiga standard - with memory expanded to 1 MByte. The very good sound and graphics capabilities of the Amiga 500 were not only of benefit to gamers - but with various programs and editors everyone could get creative with the Amiga.

The Amiga computer family grew over the years. Initially, the Amiga 1000 was followed by the Amiga 2000, which was released in March 1987. The Amiga 2000 featured an improved graphics and sound chip set, as well as a CPU upgrade to the Motorola 68020, before the Amiga 500 was introduced.

The Amiga 3000 was released in 1990, and was the first model to be powered by the Motorola 68030 CPU. The Amiga 3000 also featured a number of expansion slots, which allowed for the addition of external devices such as hard drives and CD-ROM drives. The Amiga 4000 was released in 1992, and featured an even more powerful graphics and sound chip set, as well as a built-in video editing system.

Despite the decline of the Amiga platform, a small community of enthusiasts has kept the platform alive. A number of companies have released new Amiga hardware and software in recent years. In 2012, the Amiga 1200 was re-released by Commodore International. The re-released Amiga 1200 featured a number of modern upgrades, including a higher-capacity hard drive and a USB port.

The Amiga platform has also been used as the basis for a number of modern home computers. In 2016, a company called ACube Systems released the SAM460ex, which is a PowerPC-based home computer that runs the AmigaOS 4 operating system. The SAM460ex is similar in design to the AmigaOne X1000, but features a faster CPU and a higher-resolution display.

In 2017, a company called A-EON Technology released the AmigaOne A1222, which is a PowerPC-based home computer that runs the AmigaOS 4 operating system. The AmigaOne A1222 is similar in design to the AmigaOne X5000, but features a faster CPU and a higher-resolution display.

The Amiga 500 mini is the latest addition to the Amiga computer family in 2022. It's designed to run classic Amiga games such as Speedball 2, Kick Off 2, etc. and isn't a classical Amiga computer in that sense.

Looking back at 35 years, 37 years respectively, of Amiga history, it is remarkable how the Amiga's capacity to store and display color photographs, manipulate video (giving amateurs access to professional tools), and use recordings of real-world sound were the seeds of the digital media future that we have today with digital cameras, Photoshop, MP3 players, and even YouTube, Flickr, and the blogosphere. Programs like Deluxe Paint or Cinemaware created vivid communities of practice around them. Of course, the Amiga was not perfect: the DOS component was clunky and ill-matched, for example. Multitasking lead often to crashes. And of course, Commodore went bankrupt in 1994. But for a few years, the Amiga's technical qualities gave engineers, programmers, artists, and others the ability to push back boundaries and transform the culture of computing.